Killing Eve Wiki
Register
Don't have an account?
Sign In
Advertisement
in: Episodes, Season Three, A to Z

Are You From Pinner?

Are You From Pinner?

"Are You From Pinner?" is the fifth episode of the third season and 21st overall episode of Killing Eve.

Villanelle returns to Russia to try to find her family, hoping that perhaps a new connection to her roots will give her back what has been missing in her life.

Villanelle walks down a long road. She ignores a logging truck honking, only getting out of the way at the very last moment. She arrives in a small, desolate village.

She walks up to a a house where a tied-up dog starts barking at her. Cows are roaming around outside. She finds the door to the house open and enters. She sees some family pictures hanging on the wall. She hears the television in the other room. Fyodor doesn't notice her while she looks around in the kitchen, taking in the homey feel. A young boy, Bor'ka, appears behind Villanelle and asks her who she is. He speaks English, too, because he's a fan of Elton. Yula enters while talking on the phone, ignoring Villanelle as she grabs a beverage from the fridge. Borka's half-brother Fyodor comes into the kitchen and asks Villanelle who she is. Bor'ka tells him she speaks English, making him think his room's been rented out on Air BnB again. Grigoriy, Borka's father, comes in and he, too, asks Villanelle who she is. Bor'ka urges them to speak English. Villanelle asks about Pyotr as Yula walks in. She thinks Villanelle is another one of Fyodor's sluts. In Russian, Grigoriy asks the others to call the police. Villanelle says that won't be necessary. She says they should ask Pyotr. Finally, Pyotr walks in and immediately recognizes his sister, Oksana. They all thought she was dead.

Villanelle's getting dressed up as Elton John in Bor'ka's room. He's asking her what people eat in the cities that Elton's been on tour in. In the living room, the others are arguing about her. Some think she wants money. They hear a car outside and Bor'ka says his mother is home. He is saving up to go to London to see Elton John's farewell tour. Villanelle starts panicking and throws off the costume. She tries to leave but the others stop her. Tatiana comes in. She spots Villanelle and drops her groceries bags. She cries as she realizes her baby is alive. She hugs Villanelle tightly and gives her a kiss. Villanelle lets it happen but doesn't hug her back.

Tatiana says they thought she had died in the fire. The orphanage called her and said Villanelle had burned the place down. Villanelle says it was just one floor, two at most. Tatiana says many people died. Pyotr found an old family photo album. Villanelle wonders why Tatiana didn't leave Pyotr at the orphanage. Tatiana claims she was planning on coming back for her after one month. The three of them flip through the photo album together. Villanelle sees Konstantin was right about her head being bulbous. Villanelle almost smiles when she sees a picture of her younger self in a homemade dress. She doesn't care about Pyotr's pics. She wonders where her father is in the album. Tatiana leaves to go make tea. Pyotr explains she still gets sad when their father is brought up. He points out a picture of Oksana punching him in the face.

In the evening, the entire family is playing Mafia. Fyodor suspects Villanelle is the killer but it's Tatiana. Bor'ka is disappointed that she murdered him. Pyotr is bad at the game. Fyodor says he's naive like a puppy and brings up his habit of sleeping in the barn. Pyotr says he can see the stars through a hole in the roof. Fyodor mocks him. Tatiana and Grigoriy tell the bickering boys to quit it. Tatiana welcomes her little girl home. Villanelle says she hasn't actually lived here but she'll go along with it for the sake of the moment. They toast and take shots of vodka, except Villanelle, who tosses hers aside. The family then starts singing along and dancing to Crocodile Rock. Villanelle doesn't know what to do. Pyotr pulls her off her chair. With her family dancing around, she starts moving a bit and loudly starts singing.

The next morning, Villanelle finds Pyotr working out his anger on an old couch in his wood workshop. Villanelle remembers Pyotr wanted to be a firefighter. Pyotr says that was until he realized his fear of heights. He's heard from Bor'ka that Villanelle has a great life. She has pretended she's a pilot. Pyotr has missed her. He doesn't remember their father. Villanelle recalls he taught her how to fight. He was also mean. Pyotr says she was, too. Pyotr says he beats up the couch instead of people. She advises him to beat up people, assuring him it will make him feel better. Pyotr asks if the orphanage told her they were dead. Villanelle claims they told her it was a car crash.

Villanelle and Pyotr are enjoying a Russian lunch together. A corner of the café is being decorated for the harvest festival tomorrow. Their town hosts it for neighboring towns. He promises her she'll have fun. She wonders why he hasn't left yet. He's not strong like her. Villanelle thinks their mother wants to control him. The people in the town like her. Villanelle says that's because they don't know her. Pyotr wonders why she came. She says because of hiccups. He moves to the seat next to hers and hugs her. He loudly announces his sister to everyone in the room but they don't care. The owner, Nadege, is making piroshki for the festival. She won the piroshki contest for the last nineteen years. Bor'ka is entering this year, too. He wants the prize money so Pyotr is helping him.

Ludya and Fyodor are watching a documentary on Armstrong. Fyodor says the Americans are trying to fool them. He and Ludya believe the Earth is flat. Villanelle laughs at them. Fyodor and Ludya are sure there is a secret organization influencing every government in the world that will cause the downfall of the world. Villanelle sets out to investigate thumping sound. She finds Bor'ka banging his head into the wall. Pyotr calls him to the kitchen. They are using an old cookbook for the piroshki. Villanelle joins them. She sees Grigoriy passing by the window.

She approaches him in the yard and asks him how many times he's been married. Three times. She asks about his favorite. He loves Tatiana. Villanelle says Tatiana used to be different. Grigoriy thinks Villanelle used to be different, too. Villanelle asks him what she said about her. Tatiana said she was a difficult child. Villanelle reminds him that Tatiana dumped her at the orphanage. He defends Tatiana and says she cried every night. She had a sadness in her heart. Villanelle suggests she feels like dirt for letting her family down. Tatiana brings them tea and tells Villanelle she has something for her.

Ludya plays a round at the shooting range.

Villanelle has the time of her life at the festival. She wins at the shell game twice, annoying the stall woman.

Fyodor tries to pick up a woman in front of the bouncy house. She walks off.

Nadege wins the piroshki contest. Villanelle feels for Bor'ka. Tatiana sits down next to him and starts telling him things.

Ludya introduces her friends to Villanelle. She tells them she's speaking English to seem interesting. She and the two women constitute a performance troupe called All Around. As they walk off, Villanelle observes her mother speaking to some other woman, apparently growing frustrated with the lack of attention from her.

As she's pronounced winner, her family cheers for her. Pyotr loudly screams she's his sister while their mother stays quiet.

At night, Ludya performs with her troupe. Villanelle's family happily dances along while Villanelle and Bor'ka sit down and watch. Neither of them are good at dancing. Villanelle admits she's been having fun. Bor'ka hits himself. Villanelle stops him. He's going to miss Elton John's farewell tour. Bor'ka says his mother told him she embarrassed the family. Villanelle gives him some candy to stop him from hitting himself. Tatiana makes faces at Villanelle while dancing. Finally, she beckons her.

She turns on the gas stoves and pours out a jerrycan of gasoline. She puts a lighter on the table and heads upstairs. She closes the door to Fyodor and Ludya's room.

Bor'ka is woken up by his alarm. There's a note on the nightstand reading "If you want a surprise, go to the barn."

He runs outside, not noticing his dead mother on the living room floor.

He finds an envelope pinned to the barn door. There is a lot of money in there. "Go see Elton" a note says. As Pyotr wakes up and sees Bor'ka, the house explodes.

Villanelle, meanwhile, walks away from the burning house. She screams.

On the train back home, she's shaking with a dark expression on her face, signaling her going off the rails. 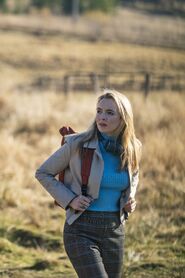