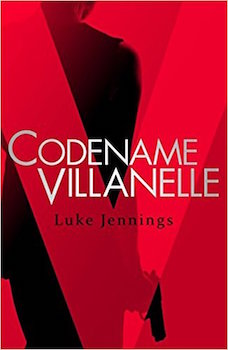 Codename Villanelle is a novel by British author Luke Jennings released April 3, 2018. It is a compilation of four e-book novellas published between 2014 and 2016. A second novel, Villanelle: No Tomorrow, was released October 25, 2018.

Villanelle (a codename, of course) is one of the world's most skilled assassins. A catlike psychopath whose love for the creature comforts of her luxurious lifestyle is second only to her love of the game, she specializes in murdering the world's richest and most powerful. But when she murders an influential Russian politician, she draws a relentless foe to her tail.

Eve Polastri (not a codename) is a former MI6 operative hired by the national security services for a singular task: to find and capture or kill the assassin responsible, and those who have aided her. Eve, whose quiet and otherwise unextraordinary life belies her quick wit and keen intellect, accepts the mission.

The ensuing chase will lead them on a trail around the world, intersecting with corrupt governments and powerful criminal organizations, all leading towards a final confrontation from which neither will emerge unscathed. Codename Villanelle is a sleek, fast-paced international thriller from an exciting new voice in fiction.

In Italy, 12 unidentified men discuss gang Lord Salvatore Greco. It is revealed he has killed 2 Judges, 4 Senior officers, and a pregnant journalist. He is also revealed to have killed a operative of the Twelve. The speaker proposes to assassinate Greco. The men unanimously vote in favour.

Two weeks later, in Paris, a young woman called Villanelle is approached by a couple in an elite private members club. She informs them she is an investor. Villanelle receives a single coded message, DEFLECT from a man named Konstantin. She leaves and it is revealed she is Oxana Vorontsova who was in remand for murder three years prior.

Three years ago, a man lays out Oxana's charges for the murder of three gangsters. The man states she is lucky that the police found her first or she would be otherwise dead. It is revealed her Ukranian mother died when she was seven and that her dad was often drunk and left her in orphanages up until his death. In one of the orphanages, she wan diagnosed with Sociopathic Personality Disorder. After she was released from the psychiatric unit, she formed an attachment to a teacher and castrated a student after he sexually assaulted the teacher. Konstantin then reveals she will be released, if she works for him.

In Paris, Villanelle receives an email containing the details of her next target, Salvatore Greco.

On the Essex coast, Oxana trains in fitness and unarmed combat by a man named Frank. The conditions are extremely cold. In response to Frank's punishments, she nearly drowns him. Oxana begins training in secret in Germany before going through an interrogation course in the United States, weapons familiarisation in Kiev, sniper school in Russia, explosives and toxicology in Volgograd, surveillance in Berlin, driving and lock picking in London, and advanced communications and decoding in Paris.

We last saw Eve and Villanelle in a spy vs. spy race around the world, crossing powerful criminal organizations and dangerous governments, each trying to come out on top. But they aren't finished yet.

In this sequel to Killing Eve: Codename Villanelle, former M16 operative Eve reveals a new side to her strengths, while coming ever closer to a confrontation with Villanelle, the evasive and skilled assassin.

Retrieved from "https://killingeve.fandom.com/wiki/Codename_Villanelle?oldid=1723"
Community content is available under CC-BY-SA unless otherwise noted.