Killing Eve Wiki
Register
Don't have an account?
Sign In
Advertisement
in: Episodes, Season Two, A to Z

"Desperate Times" is the fourth episode of the second season and 12th overall episode of Killing Eve.

Villanelle decides to take matters into her own hands on a trip to Amsterdam. Carolyn is called in to face the music with her boss. After the discovery of another dead body, Eve and her new team make a break in their case.

Carolyn is kept waiting in a waiting room. As soon as she picks up a magazine, the receptionist tells her she can go in.

In Helen's office, Helen offers her some chips. She brings up Carolyn's cock-up. If it hadn't been for her operation in Lebanon last month, they may have gotten away with Konstantin going AWOL. Helen thinks they need to pull the plug on Operation Manderley. Carolyn objects but Helen is not having it. Carolyn promises it's all going according to plan.

Carolyn looks pensive as she crosses a bridge.

Hugo and Jess arrive at the office as Hugo complains about a girl he's been seeing. Eve is buried in evidence on The Ghost. Carolyn informed her last night that Alister Peel's godson, Jonathan McVey, died of a heart attack last week in his office. Eve has looked into whether people connected to Alister died recently and she found some deaths that were made to look natural but are suspicious in retrospect. Whatever this is, it has been planned for a long time. Jess asks Hugo to schedule a meeting with Aaron Peel.

Villanelle is in Amsterdam with Konstantin. He has a mission for her tonight. She can make it fun to show Eve what she has been missing out on. Villanelle comments on Konstantin's ugly shirt.

They visit the Rijksmuseum. As they stare at a painting, Villanelle snores and yells that this is boring. One painting depicting carved-open men hanging upside down from a wooden structure captures her eye.

Eve and Jess arrive at the Pharaday offices to meet Aaron. A secretary hands them NDA forms to sign. They refuse to do so, earning them a badge clearly stating that they did not sign. Jess is annoyed that those teenagers working there earn ten times what they do.

As they wait, Jess enjoys a free beverage. Aaron joins them and asks if they know who killed his father. They say that's not why they came. He berates them for not having solved the case. Eve says they came to talk about the sale of the company. Aaron wonders why that's their business. Jess says they think it's connected and brings up that several connections of his father died. He coldly says that given the amount of people his father employed, people among them are bound to die. Eve says what is for sale precisely. Aaron summons a lawyer with a few clicks on his tablet. The lawyer says Aaron declines to answer all their question. Jess gets this is going nowhere and wraps it up. Eve says people are dying due to whatever they're selling. Aaron mocks them and says intelligence and secret services are finished because companies like his own more information than the Pentagon and MI6 combined.

Posing as a cleaner, The Ghost drops by Linda's hotel room.

Villanelle shuts down a Dutch hipster who wants to take a picture for her Instagram. Villanelle observes a Dutch family with a baby. She then writes a postcard of the intriguing painting to Eve, saying she hopes Eve hasn't forgotten about her.

In a bar, she enjoys some bread with hagelslag. Konstantin asks if she got a good look at her target. Villanelle says that freak is into farmyard animals. She asks about his daughter. Konstantin says she'll be fine without him. He suggests Eve has made Villanelle go soft. To prove him wrong, she trips up a woman passing by.

Jess vents her frustration about Aaron to Eve. They're not sure he was the one behind Alister's death. Eve thinks he wouldn't trust a woman to do the dirty work. Kenny informs them there's another body: Alister Peel's secretary, Linda.

Jess and Eve arrive in the secretary's apartment. Her body is lying on the bed. It looks like she died from a heart attack. Jess comments the deaths are more frequent, which means something big is about to happen. As Jess comments on the indignity of being murdered while bleaching one's mustache, Eve looks around the room. The secretary worked with Alister for years so she would have known where the bodies are buried. Eve deducts that The Ghost doesn't like blood.

Villanelle has gotten dressed in a pink Bavarian dirndl dress and a cherubic pig mask.

The father of the family she observed earlier is walking down a street in Amsterdam's red-light district. He approaches a young woman and, after harassing her about her job, asks how much. He leaves when the woman's pimp gets threatening. He then sees Villanelle walking by in his costume, which draws his attention. He follows her into a building and then into a room. He starts undressing. She takes handcuffs. She puts them on his hands and pushes him to the ground. He enjoys it and snorts like a pig. She opens the curtains, revealing they are in a room facing the streets. He objects but she ignores him as he tells her to stop. Moments later, she has him trussed up and suspended upside down from the ceiling. A crowd gathers out on the street as Villanelle takes out a knife, getting the crowd all riled up. The man begs, telling her he has a wife and baby. She then points out his wife is among the crowd. She then slices open his abdomen. Sara, the wife, doesn't flinch and walks off. The crowd thinks it's all part of a performance.

Eve comes home and finds Niko cooking. Jordan, their new security guard, is sitting at the table. Eve forgot to inform Niko. She apologizes and says everyone on her team has to have protection. He asks if it's because of Villanelle. Eve says her job is not all about her. She's not enjoying this either. Niko says none of this is normal, which includes her trying to gaslight him into thinking that it is. It's not kind. He wants the kind woman that he fell in love with to come back.

Villanelle meets with Konstantin. She didn't enjoy the killing. She asks if her job is just going to be scorned wives and scumbags from now on. She wants to go back to London. Konstantin repeats that Eve is not interested in her anymore. She scoffs. He tells her not to make him regret all this but she points out he has no other options anyway. He tosses her the money and leaves.

Carolyn meets with Len at the office to receive the mail. She goes through it as Len talks about an anniversary party. She finds Villanelle's postcard. She puts it in her pocket.

She calls AIVD, the Dutch Intelligence and Security Service.

Kenny informs Eve that Aaron has refused protection. Carolyn comes in and tells Jess she wants her to go to Amsterdam to investigate the butcher-like murder. Eve asks if it could be Villanelle. Carolyn asks her how she's getting on with the Ghost case. Eve wants to come but Carolyn instructs her to focus on the situation at hand.

Villanelle is bored in her hotel room.

Villanelle enters the building across the street from where she killed the man yesterday. She pays a prostitute to let her look out the window.

Eve is watching the board with all the evidence pinned on it. Kenny informs her that Linda's toxicology report came back. It was a nerve agent found on her fingertips and upper lip. They also found desflurane, an inhalation anesthetic. The Ghost wanted to make it painless. This tells Eve that she knows about drugs. She asks Kenny to look for non-white women over 35 in the medical profession who have been in any kind of trouble. Then he can run that list against cleaners who have worked at McVey and Linda's building. Hugo is impressed by her.

As the prostitute sleeps, Villanelle continues to observe the murder scene across the street. She's disappointed when Jess shows up instead of Eve, which makes her think Eve has truly forgotten about her.

As the computer is taking ages, Hugo wants to get something to eat. Kenny can't leave.

An angered Villanelle shuts down a drug dealer but then turns around asks what he has.

Outside the dinner, Eve and Hugo are smoking. She hasn't smoked since college. He asks if she's excited about The Ghost because she seems tweaked. He gets it. He says they got this job for the exact same reason: not wanting to die of boredom. She admits to being excited. Hugo asks about the deal with her and Villanelle. Eve says she doesn't know. Hugo thinks Villanelle fancies her. She says not everything is about sex. He's not sure that's true. He asks if she likes watching Villanelle or being watched. She replies she likes both. She is about to let Hugo kiss her when her phone buzzes. Kenny found The Ghost.

A high Villanelle enters an underground club. She briefly locks eyes with a woman on the dance floor but the woman turns away from her. She takes another pill. The music appears distorted and starts bugging her.

In the bathroom, she gets into a fight with a girl who cuts the line. She beats her up and starts choking her. She doesn't let go until Konstantin interferes. He picks her up and carries her out of the club, ignoring her pleas to let her go.

Eve walks onto a school playground while talking Korean on the phone with her mother. A Korean woman rushes past her with her two kids. She approaches the woman and pretends to have found a banknote. She hands it over to her and tells her she's waiting. Seconds later, a red laser dot appears on the woman's face. Eve asks her if she wants to be shot in front of her kids. She asks the woman to just come with her.

Villanelle wakes up after a rough night. She finds Konstantin sleeping on the floor.

Carolyn watches from behind the mirror as Eve gets ready to interrogate The Ghost. Eve checks herself in the mirror, unaware of Carolyn's presence. She puts her hair up.

Villanelle breaks down as she watches herself in the mirror.

Meanwhile, Eve has a determined look on her face. Carolyn asks her if she's ready. She is. She sits down at the table and the Ghost is brought in.

The postcard Villanelle sends Eve is of a painting by (allegedly) Jan de Baen of the Gebroeders De Witt depicting them strung up after being cornered and skinned alive by an angry mob. 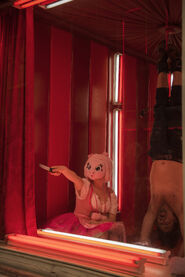 “This is so BOOORRRRING” - Villanelle