Don't I Know You?

Don't I Know You?

"Don't I Know You?" is the third episode of the first season and Killing Eve overall.

When Villanelle kills a Chinese colonel at a kink clinic in Berlin, Eve and Bill travel out to investigate. While Eve and Bill chase up a number of promising leads, Villanelle enjoys the cat-and-mouse of their proximity. But as they draw closer, Eve comes to realize that this is much more than a game.

Eve describes Villanelle's features to a sketch artist while Bill looks on amused.

In Berlin, Zhang Wu, a Chinese colonel, answers a call on his cell phone as he is walking. He speaks Mandarin as he explains he has to see the doctor but will be on the call. He enters a building and goes to the "Hot Medica" office where he signs a waiver. He learns that his regular nurse, Hortense, is unavailable. He is disappointed because it is his birthday and Hortense was going to do something special for him. The receptionist tells him she will see what they can do before confirming his safe word, "frühstück". While Zhang waits, he chats with another patient who hopes they won't be nice.

Zhang enters a room where Villanelle is preparing surgical instruments. She commands him to take off his clothes. She straps him to the table, including his neck, and reviews his previous visit where he received a "vigorous scrotal massage." She places a face mask on him and tells him that he will get no special treatment for his birthday which makes him laugh. She takes a pair of medical tongs and places them under his hospital gown and clamps his testicles as she reiterates no special treatment. She twists, which he enjoys at first before calling out his safe word. Villanelle stops and walks over to the gas valve, turning it up as he struggles. She tells him to look at her as he dies.

Niko cleans off a freshly laid egg from a chicken in their house as Eve wonders whether it is edible. Niko questions her about her new job and Eve explains it is just gathering and analyzing information.

Eve heads to the office talking to Bill on her cell phone about Carla de Mann's deadly asthma attack. She meets up with Bill carrying his baby daughter in front of their office and helps him with his "childcare emergency." Carolyn is in the office waiting for them with Elena and Kenny to let them know that there has been another assassination. Eve thinks that Carolyn is referring to Carla de Mann but Kenny tells her that it was a Chinese colonel, Zhang Wu, who has been killed. The name the assassin gave to the receptionist was "Eve Polastri". Outside, Eve paces as she begs Carolyn to keep her on the team. Carolyn asks her what she wants to do.

In Berlin, Villanelle sits outside and watches with disappointment as two male agents arrive at the "Hot Medica" office.

Eve has returned to the office and tells Bill he is going with her to Berlin. Bill tells her to take Elena instead but Eve needs Bill because he speaks German and has Berlin contacts. Bill jokes that he is going to die while Eve tells him that it is not likely that Villanelle will still be there.

Villanelle has taken an older American tourist woman back to her room and tells her to take her hair down. She informs the woman that she will call her Eve and they begin kissing before Villanelle says that she is going to hide and "Eve" is going to find her.

Niko arrives home early as Eve struggles to get a suitcase down to begin packing for her trip. He reminds her to label her suitcase so that she does not lose another one.

Eve and Bill have arrived in Berlin and take a taxi to the "Hot Medica" building where Villanelle sits across the street watching. They are greeted by Weber, one of Bill's contacts, who takes them to the murder scene where Zhang was poisoned with carbon monoxide. Jin Yeong from the Chinese government has asked for a second opinion on the autopsy so Eve will have to contact him for a copy of the autopsy report. They leave the building and Eve asks Bill to watch their suitcases while she calls Kenny to see if he can locate Jin's whereabouts from his email address. Kenny sends her Jin's location as she notices that her suitcase has gone missing.

Villanelle takes Eve's bag back to her room and goes through it, placing a green scarf around her neck. Konstantin shows up to find out why she is still in Berlin and to warn her that Eve is in town. He wants Villanelle to watch Eve. The American woman arrives and Villanelle introduces her as "Pamela" to her "angry uncle". Konstantin warns her one last time to not do anything stupid and leaves. Villanelle begins to dress Pamela in Eve's clothes.

Bill apologizes to Eve for losing her suitcase as they scope out Jin's location. She mentions that Niko will be upset about her losing the green scarf. They approach Jin and ask him about Zhang and the second autopsy, which now says that Zhang died of a heart attack. Jin invites Eve to dinner so they can continue their discussion. After they leave their meeting with Jin, Bill warns Eve that Jin wants to have sex with her. He tells her to get something nice because he will take her out afterwards. Villanelle bumps into Bill on the street and keeps walking.

While Eve tries on outfits for her dinner, she talks on the phone to Elena, asking for intel on Jin. While she tries on a dress, Villanelle keeps a watchful distance. Back at the hotel, Niko video calls her from a dinner party at their house that she had forgotten about. Niko asks her about her new dress and she explains about the dinner with Jin. Bill knocks on the door bringing her a razor.

Villanelle plucks her eyebrows as she uses the USB drive that Sebastian had given her to watch a recording of the video call between Eve and Niko.

Eve shaves her armpits as Bill critiques her fashion sense, telling her she needs to remove her bra. They discuss Bill's wild years in Berlin and his open marriage. Bill quizzes her teasingly on whether she is attracted to women, specifically to Villanelle. Bill walks Eve to the train station and spots Villanelle watching Eve as he is leaving. He follows her and stops her from getting on the same train as Eve on the pretext of asking her about the green scarf that she is wearing - the same one that Eve had had in her suitcase. Villanelle plays it off that she got it from her mother and leaves the station with Bill following her.

Eve arrives to her dinner with Jin. He presents her with a gift and withholds information until they've had a glass of wine.

Bill continues following Villanelle through the streets of Berlin. She realizes he is following her and smiles.

Eve is becoming frustrated with Jin and finally manages to pry out of him that the Chinese government might be covering up the cause of death because of "sex" but that they did not have Zhang assassinated. He has to drop the investigation but prompts Eve to keep it going.

Bill leaves a message for Eve that he is following after someone in the Cassiopeia area and asks her to get in touch with Weber. Villanelle enters a club called Funkeln and Bill tries to follow but is stopped by the bouncer and sent to the back of the line.

Jin reveals to Eve that the week before, Zhang had hacked into a Chinese Intelligence agent's account and discovered that the agent had been getting paid millions. That agent is now also dead. Eve finally opens the gift Jin presented her with at the beginning of the meal and discovers that it is a 32GB memory stick. Bill leaves another message for Eve which prompts her to check her voicemail. She leaves Jin and goes to meet up with Bill.

Bill has finally made it into the club and searches for Villanelle on the dance floor. Eve arrives at the club and explains to the bouncers that she needs to get in because she is with the British authorities and it is an emergency. Bill spots Villanelle and tries to catch up with her while Eve makes her way along the dance floor looking for him. Villanelle turns around and smiles at Bill before heading toward him. He tries to run away but is trapped in the dancing bodies and Villanelle easily catches him, stabbing him repeatedly with a short blade, before taking off again. Eve struggles to reach Bill as he bleeds out on the dance floor.

Girl in the Room by Cat's Eyes

Fail We May Sail We Must by Unloved

I Can't Help Myself by Phil Kieran

BTS in Don't I Know You? 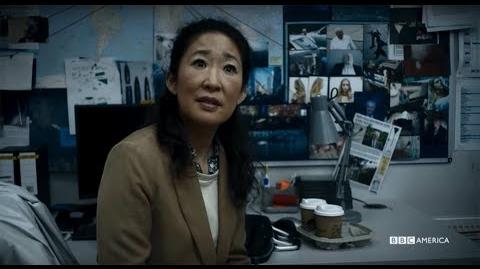 Episode 3 Trailer Don't I Know You? 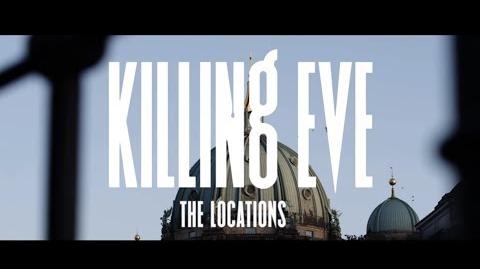 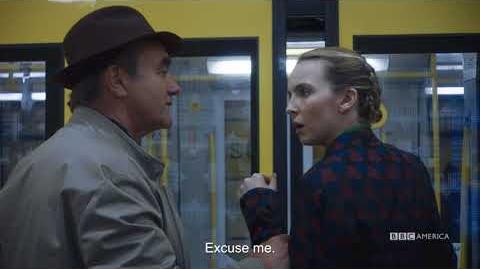