"God, I'm Tired" is the eighth episode and season finale of the first season and the 8th overall episode of Killing Eve.

Villanelle's mission is proving anything but straightforward, forcing her to take drastic measures. Meanwhile, Eve makes a shocking discovery, which leads her right to Villanelle and an electrifying confrontation from which neither will emerge unscathed.

Villanelle walks down a road with Konstantin's daughter, Irina, who won't stop talking. Villanelle pulls a gun on her and tells her to shut up. They get into a shouting match and Irina says she will stop shouting for food. A car is coming down the road and Villanelle has Irina stick out her thumb so they can get a ride.

Eve and Kenny walk through the streets of Moscow. Eve wants to confront Carolyn about meeting with Villanelle in prison but Kenny is scared of Carolyn. They arrive at Carolyn's hotel and Eve convinces the front desk to give her a key to Carolyn's room. Kenny wants to knock first to make sure Carolyn is not in the room. They find Carolyn's room a mess and Konstantin standing with a hair dryer. Carolyn exits from the bathroom and stops short when she sees Eve and Kenny. Eve states that Villanelle is in the prison. Carolyn explains that she escaped, locked Konstantin's wife in a cupboard, and kidnapped his daughter.

Villanelle and Irina sit on a bench, eating. Villanelle asks how her English is so good and Irina recites, "language is information and information is everything," a quote Villanelle knows as well. Irina also speaks Spanish, German, and Mandarin.

At breakfast, Carolyn tries to send Kenny away but he asks why Konstantin's security isn't looking for Villanelle and Irina. Konstantin reveals that the Twelve want him dead. Eve thinks they should go back to Anna's and calls her.

Anna's phone rings just as her doorbell buzzes and she opens the door to Irina. Irina pushes her way inside while Villanelle stands out of sight in the hallway, pointing a gun.

Konstantin decides to go with Eve to Anna's and they will bring her back to the hotel. Carolyn sends Kenny to pack up their equipment, threatening to fire him if he refuses, while she is going to visit Vlad to set up protection for Anna.

While Anna is distracted with Irina, Villanelle sneaks into Anna's apartment. Anna suggest calling the police to help Irina get home and Irina agrees, much to Villanelle's annoyance. Villanelle enters Anna's bedroom and looks for the coat she sent, finding it under the bed. She pulls it out and checks the lining, retrieving a note from Eve that reads, "Sorry Baby X." Anna discovers Villanelle in her bedroom and Villanelle pulls the gun on Anna, demanding to know where Eve is. Anna wants to tend to Villanelle's wounds before giving Villanelle Eve's number.

Kenny begins packing away their equipment when something on the prison CCTV catches his eye. He witnesses a guard picking up the piece of paper Nadia slipped under her door before Villanelle killed her.

Konstantin drives Eve to Anna's apartment, already knowing where she lives without Eve giving him the address.

Anna is busy gathering supplies to treat Villanelle's wounds. Villanelle notices how Anna has not changed the apartment at all since Villanelle killed her husband, Max. Villanelle reveals to Irina that she and Anna had sex. Anna turns around, brandishing a gun. Villanelle scoffs at Anna being able to shoot her and points her own gun at Anna. Anna turns the gun under her chin and shoots herself so Villanelle cannot kill her. Villanelle commands Irina to get Anna's phone and find some money.

Eve asks Konstantin why Villanelle wants to kill him. He replies that if he tells her, he will have to kill her and starts laughing. Eve starts laughing with him, insisting repeatedly that it is okay for him to kill her. She asks if he is part of the Twelve, which causes him to laugh again. Eve thinks Villanelle wants her but Konstantin says she wants him. Eve accidentally opens the glove box, revealing a gun, and Konstantin promptly closes it again.

Villanelle and Irina sit under a colonnade. Irina has decided that Villanelle is a good person because she is sad. Villanelle sends her off to steal from a woman seated at a table.

Konstantin has pulled over the car for a bathroom break. When his back is turned, Eve grabs the gun from the glove box and points it at him. Eve questions him about Villanelle. Konstantin admits he recruited Villanelle for a private organization and claims he has not seen her in years. Konstantin explains that he wants his daughter, the Twelve want him, and Eve wants them so if Eve leads him to his daughter, she will get everyone. Eve's phone rings with Anna's number but it is Villanelle demanding her passport. Villanelle sets up a meeting at Cafe Radozhny.

Villanelle and Irina are already at Cafe Radozhny when Konstantin and Eve arrive. Irina runs toward her father but Villanelle stops her and takes her hostage, threatening the other patrons in the restaurant if they move. Eve pulls the gun from the glove box on Villanelle. Konstantin offers to go with Villanelle while Eve offers up the cash and passport for Irina. Villanelle calls Eve's bluff because she will not hurt anyone with the gun. Eve sets her gun down. Villanelle, Irina, and Konstantin all tell Eve to throw the passport and money, which Eve does, but the toss falls short. Villanelle has one of the diners bring it the rest of the way to her. Villanelle tells Konstantin that she has to do her job and shoots him in the stomach. Irina jabs Villanelle and manages to get away while Eve picks up her gun and aims it at Villanelle, calling her, "Oksana." Eve asks her to come with her, just the two of them. Villanelle backs away and flees.

At the airport, Carolyn informs Eve and Kenny that Konstantin has died. Eve checks her voicemail and hears a message from Elena that a young man (Sebastian) was found dead at an apartment in Paris with the same chemical in his system that killed Carla De Mann. Elena has uncovered that one of the apartments is paid for by the same account that was paying off Frank. Eve lies to Carolyn and tells her it was Niko on the phone. Carolyn confronts them about giving Vlad her love letters to Konstantin and fires them both. Carolyn and Kenny board the flight to London but Eve takes off in another direction.

Eve enters the apartment and takes a look around. She opens a wardrobe and finds various uniforms and wigs along with a drawer full of weapons. She opens the fridge, finds it stocked with champagne, and grabs a bottle. In another wardrobe, she discovers designer clothing and her own green scarf. She starts tearing the clothes off their hangers and goes into a rampage, making a mess of the apartment and breaking bottles.

The sound of the door opening sends Eve to the weapons drawer where she grabs a gun. She comes out to find Villanelle standing in front of the ransacked wardrobe. She threatens to kill Villanelle but Villanelle again calls her bluff. They sit down across from each other, Villanelle at the vanity and Eve on the edge of the bed. Eve admits that she thinks about Villanelle all the time and wants to know everything about her. Villanelle admits that she masturbates about Eve. Eve lies down on the bed, exclaiming, "God, I'm tired." Villanelle picks up the gun and lies down next to Eve on the bed. Eve asks if she is going to kill her and Villanelle promises she won't before setting the gun on the floor. They turn on their sides and face each other. Eve admits she has never done anything like this before. Villanelle says she knows what she is doing and moves closer, stopping when she feels a blade poking into her stomach. Villanelle still does not believe Eve can do it. Eve says she can and stabs her before rolling Villanelle onto her back and straddling her. Villanelle begs her not to pull the blade out but Eve does so and Villanelle begins to bleed all over the place. Eve runs to the kitchen for a towel and Villanelle starts shooting at her. When Eve finally makes it back to the bedroom, Madame Tattevin stand there, informing Eve that Villanelle has left.

Konstantin and Eve are headed to Anna's home 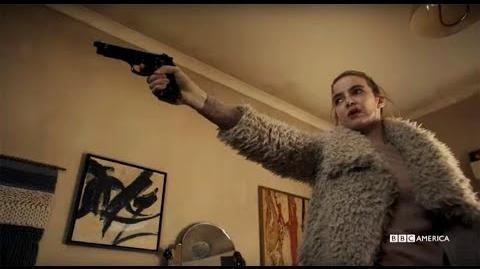 Eve: God, it makes me rage how efficient things are when you're a dick to people.