I'll Deal with Him Later

"I'll Deal with Him Later" is the second episode of the first season and Killing Eve overall.

In the aftermath of her recent assignment, Villanelle is ordered to take a break. Never one to do as she's told, she goes ahead with her next mission regardless. Meanwhile, Eve is given a dream opportunity to join a secret MI6 unit tracking Villanelle and the shady organization she works for.

A woman on a bus sees a bloodied man begging for help from inside an office building. She watches him for a moment before answering her mother's call. Inside the office building, Villanelle stalks after her latest target (Filip Petrova) who begs for his life. He asks why she's doing this. She tells him she has no idea and shoots him twice. She watches as he takes his last breath and then sits down on a chair, apparently bored.

Eve shows up at the Purple Penguin to meet with Carolyn, who cuts right to the chase. They discuss Eve's background: how she was born in the UK but moved to Connecticut when her parents split up and came back when her father died. Eve says she basically married her father. Carolyn confronts Eve with a folder of documents on female assassins that they found when they were going through Eve's computer after she was fired. Eve confirms she did all this on her own because she's a fan. Carolyn asks why she compiled these specific cases. Eve believes there is a female assassin operating internationally and targetting influential people. She doesn't have a signature but she certainly has style. She's showing no signs of slowing down and that fascinates Eve, even though it apparently makes her a fantasist. And since she's outsmarting the smartest of MI6, she should get to kill whoever she wants. Eve says it's not her job to care anymore.

Carolyn takes Eve to a decrepit building where a dingy office has been set up with all of Eve's information on the female assassin spread out on a wall. She has someone keeping tabs on anything that might lend itself to the theory. This killer leaves no trace and has no pattern. No one has owned up to all these murders while usually someone does. With a lack of enthusiasm from her superiors, Carolyn has set up an "unofficial-official" investigation that she wants Eve to run secretly. She's intuitive and makes insane suggestions. And she's been fired so no one cares about what she does next. Carolyn clarifies she'd be completely deniable. Eve is enthused. Carolyn wants her to find the assassin so they can uncover the pattern. Kenny Stowton enters and is introduced to Eve as the person who has been gathering the evidence. Carolyn needs people to put it all together. Eve is allowed to choose two more people for her team.

In Paris, Villanelle returns to her apartment and passes by one of her neighbors, Sebastian, digging through the trash looking for his TV remote. He comments on her bruised eye and she waves it off. She compliments his pants as she goes upstairs. He yells his name.

She enters her apartment to find Konstantin waiting. He wants her to get assessed again because of the mess she made in London. Until she gets assessed, she won't get any new assignments.

Villanelle shows up to her assessment with Jerome in a flouncy pink dress. Konstantin is also there as Jerome questions her about her job, her colleagues, and her state of mind. She has no interest in why she does what she does. She hasn't been anxious. She talks about her latest kill with a smile. His talking made her impatient. Jerome shows her a picture of a hanged man and she compliments his legs. He then shows her a picture of a hanged dog and Villanelle pretends to get worked up over it before laughing at him. Konstantin passes Jerome a piece of paper. In Russian, Jerome asks Villanelle if she still dreams about Anna and reveals a faceless portrait surrounded by dark curls on the paper. Seemingly feeling a bit uneasy, Villanelle tells them it is not a portrait of Anna. Based on her reaction to Anna being brought up, Jerome refuses to sign her off.

As Villanelle and Konstantin walk through Paris, she argues with him about letting her complete her next assignment, for which she already has the perfect outfit. He tells her it's dangerous with lots of security and that it is good to have someone worry about her and she hugs him, picking the Paris assignment postcard out of his pocket. He tells her to go home and do something normal.

Back at home, Villanelle runs on a treadmill when her doorbell rings. It's Sebastian with some Arnica for her bruised eye. He wanted to make sure she knows he can always talk to her. She invites him out with her.

They eat ice cream and walk. She has told him she's not allowed to sell her perfume. He tells her she cannot let people stand in her way. They come across a little band playing. She says she likes national anthems. As he talks about how he ended up in Paris, she gets distracted by a passing woman.

They go back to Sebastian's apartment where they have sex. She goes fast, ignoring his pleas to slow down. He comes soon and she lies about having climaxed, too. She softly puts her hand on his throat as he tells her he's never going to hurt her.

In the morning, Villanelle gets up and tells Sebastian she's going to work to sell her perfume. She leaves his apartment carrying her dress and passes by Madame Tattevin who tells her she did a good job. She returns to her apartment and puts on a gas mask as she begins working on a perfume, adding some sort of drug.

Eve has invited Bill and Elena to come work with her. She brings them up to speed on the assassinations she believe were done by the same woman. Bill plays contrarian, asking for proof that it is the same person for all the killings and proof that it is a woman. There is no direct proof or witnesses pinning it all on the same person. He's also critical of the lack of motive. He just wants Eve to be open to the possibility that these murders are not connected. She can't lead a team with assumptions. Eve asks about the bathroom. Kenny shows her to it. Inside, she lets her hair down, which reminds her of the encounter she had in the hospital bathroom.

As she returns, she tells Kenny and Elena about the encounter and asks Kenny for all nurses' records from the hospital. Elena informs her Bill has left the office in a sulk.

Eve chases after him and he admits he is still trying to adapt to no longer being the boss. He thinks the assassin is just a lackey and they should be going after the people controlling the assassin. Eve points out that their profile of the female assassin is the only connection they have to the people behind her. She thinks it's not someone with enemies or they would have been exposed by now. If these kills are not random, someone's plan is going really well. These people are powerful and completely invisible. That assassin is their only contact to them. She lists the few things they know about her. She must score high on the psychopathy scale.

She returns to the office while Bill goes to buy some chocolate. She asks Kenny to look up any females worldwide aged 16-45 who have medical or prison records displaying violent and psychopathic traits. It would take months. She asks Elena to have a drink with Frank and ask about the CCTV. Elena sighs but complies. Kenny tells Eve he'll have the hospital ID's by this evening. Elena leaves for the pub.

Villanelle gets dressed in a wig and catering outfit, going by the name of Claudie. She goes to a political fundraiser and pretends to cater, serving up champagne for the guests. She briefly listens to a speech that thanks the primary donor and perfume manufacturer, Carla de Mann. She then follows Carla to the restroom under the pretext of providing her with a tampon. In the bathroom, she approaches Carla and brings out a bottle of perfume for de Mann to smell. She claims Carla has inspired her to get her own perfume business going, adding that she named the perfume after her. Carla complies and tries it, but she can't smell anything. She then starts wheezing and coughing. Villanelle smiles and watches motionlessly as de Mann suffers a fatal asthma attack. Villanelle then takes her hand to say bye-bye before leaving.

Bill and Eve meet up with Frank and Elena at the pub. They both apologize for calling Frank a "dick-swab." They then grill him about the CCTV footage. He's disappointed to hear that Elena wasn't asking him out. Frank laments that none of them ever invited him out for a drink after his wife died before revealing that he made up the CCTV story because he thought it was disrespectful of Bill and Eve to interfere with the investigation. After saving face by claiming Bill and Eve were massively insensitive today, Elena takes Frank outside to catch a cab so he can pick up his kids. They claim they both feel awful.

At home, Eve lies to Niko about what she's been up to all day since being fired from MI5. He commens she's glowing. She blurts out that she's now working for MI6 tracing that assassin she was right about. Niko thinks it sounds dangerous. She says they'll talk about it tomorrow.

Villanelle returns home to find Konstantin threatening to cut her allowance in half for assassinating de Mann. Sebastian interrupts them and Konstantin pretends to be Villanelle's brother. She adds he has a condition. Sebastian introduces himself to Konstantin and asks Villanelle about the job. He wants to smell the perfume Villanelle was working on. He feels he's intruding and says he'll come back later. Villanelle tells him she will bring the perfume to him later. He gives her a thumb drive as a gift and, as he is leaving, spots the perfume bottle in her bag and takes it with him. Villanelle returns to Konstantin and asks why he lied about there being security at the fundraiser. She threatens him with a knife to tell her what's really going on. Konstantin tells her about a woman in London leading a new closed operation set up specifically to go after Villanelle so she needs to be subtle. She says she can do that. Villanelle pops a champagne cork and asks about the woman's name. He tells her it's Eve Polastri. They hear a loud thump outside. They open the door to find Sebastian suffocated to death in the hallway.

Using the new thumb drive with anthems on it, Villanelle searches through images on the internet for "Eve Polastri."

Eve goes to her new office to search through the photos of nurses from the hospital where Kasia was murdered to see if she can find the nurse she met in the bathroom.

Villanelle encounters an article on Nikolas Polastri's bridge club that has a group picture with Eve tucked away in the back of the photo. She realizes that Eve was in the bathroom at the hospital.

Bill joins Eve in the office. Eve is glad that he's on board now. She reveals to him that she has met the assassin. 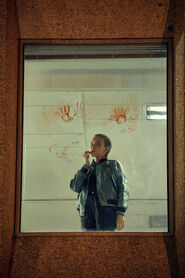 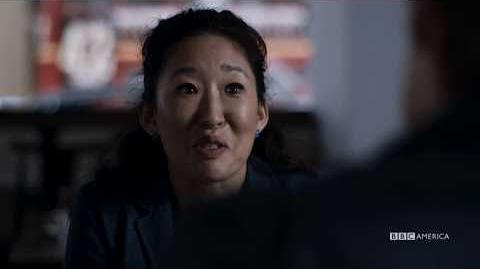 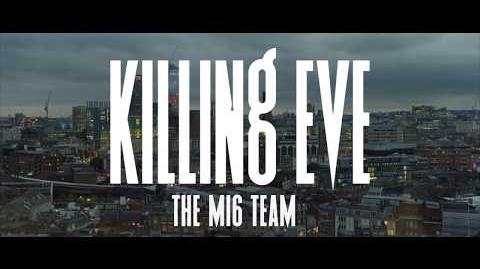 Retrieved from "https://killingeve.fandom.com/wiki/I%27ll_Deal_with_Him_Later?oldid=4695"
Community content is available under CC-BY-SA unless otherwise noted.