I Don't Want to Be Free

I Don't Want to Be Free

"I Don't Want to Be Free" is the seventh episode of the first season and Killing Eve overall.

Tensions are running high as the situation in Moscow escalates, and Eve starts to question who she can trust. Despite the danger, with her sights firmly set on Villanelle, Eve goes rogue. With both women under pressure, the stakes are higher than ever.

Eve leaves her room at the Hotel Atlasov in Moscow to go to breakfast. She runs into Carolyn returning from being gone all night and wearing the same clothes as the day before. Carolyn tells Eve that Vlad had a change of heart and will be giving them Nadia. Carolyn receives a phone call alerting them that Nadia was murdered. Konstantin joins Eve and Carolyn for breakfast and explains that Nadia was attacked by another inmate, "Natalie." Eve wants to meet "Natalie" but Konstantin laughs and refuses. Konstantin takes his leave, telling them they can stay but they're no longer invited.

As Eve and Carolyn walk the streets of Moscow, Carolyn reveals that Kenny is now in Moscow. They arrive at a shop and are allowed into a backroom where Kenny has set up a temporary office.

At the prison, Villanelle is allowed outside for exercise. She tries to bribe and threaten her guard into giving her a phone call. The guard restrains her and takes her back inside.

At their new office, Eve tries to get the heat to work as she hypothesizes that "Natalie" is actually Villanelle. Kenny volunteers to check CCTV for visitors but Carolyn shuts him down. Eve changes tactics and decides they must find Anna. Carolyn says it is unnecessary and asks Kenny to have Elena fly them back to London since there is nothing left for them in Moscow. Carolyn will remain behind to "tie up" some things. After Carolyn leaves, Eve and Kenny decide to remain in Moscow anyway and Kenny presents Eve with some personal letters of his mother's that he found.

Villanelle is brought back to the Hole and finds she has a new roommate, Inga. Inga lies motionless and unresponsive to Villanelle's taunts.

The letters Kenny found are dated from 1977-1978 and are of an explicit nature. Eve is planning to give them to Vlad as proof that he was not the one involved in the plutonium plot but asks Kenny to go through them to see if there might be a code. Kenny also found some old photos, one of which has Konstantin sitting with Carolyn. He provides Anna's address to Eve and she tells him it is okay if he wants to go back to London. He wants to stay and is planning on going through the CCTV cameras at the prison to look for Villanelle.

Villanelle raps on her prison door and asks the guard if she can make a phone call. The guard refuses and warns Villanelle to not fall asleep around Inga. Villanelle paces and and fidgets within her cell as Inga remains motionless. When Villanelle eventually falls asleep, Inga gets up and works a razor blade out of her mouth. She tries attacking Villanelle who immediately blocks her and climbs on her back. Villanelle viciously bites into Inga's neck before the guards enter and drag her away.

Eve visits Anna where she works as a language teacher. Eve lets Anna believe Oksana/Villanelle is still dead as she questions Anna on why a secret organization might have recruited Oksana. Anna reveals she has a few letters from Oksana at home.

Villanelle is being transported along with Agniya to the court. The van screeches to a stop, knocking the guards down. Shots are fired outside and one of the guards pulls her gun. She shoots the other two guards dead and unlocks Villanelle's handcuffs as the van door is blown open. A man in a motorcycle helmet tells Villanelle to come with him. She exits the van and takes a moment to look around the accident scene of police cars and murdered guards. She tells Agniya that she is free but Agniya doesn't want to be free and would rather die. The remaining guard shoots Agniya in the head. Villanelle climbs onto the back of a motorcycle behind the man who rescued her and they leave the carnage behind. They eventually stop and the man takes her into a building, directing her up a flight of stairs. She meets another man, Anton, who is taking over from Konstantin as her new handler. He has a postcard labeled Moscow and a suitcase of clothes for her. She has until tomorrow night to complete the job and meet him back there. He gives her a gun and Villanelle shoots him in the head. She sits down at the laptop and looks up the postcard information for her next target: Konstantin.

In Anna's apartment, she gives Eve a large box filled with letters and gifts from Oksana. The letters are all written in French, Oksana's favorite language. Eve pries and Anna reveals that she gave Oksana extra time and attention because everyone else was fearful of her. Oksana would give her gifts of expensive perfume and designer clothes but she did not like Anna's husband, Max, and claimed that Anna only loved him for his penis. One night, when Anna came home, there were balloons and a cake and Oksana had castrated and murdered Max. Eve finally reveals that Oksana is not dead and is currently in Moscow. Eve pulls out the old photo of Carolyn and Konstantin and Anna points out Konstantin as the man who told her that Oksana had died.

Konstantin arrives at his home to hear his daughter calling for him. He enters her room and finds Villanelle with a tape recorder in her hand. She points a gun at his head.

Anna gives Eve a bag, saying it arrived a month after Oksana had died. Eve opens it and finds an expensive French coat. Unbeknownst to Anna, sewn into the lining of the coat is a passport for "Marta Poslovina" with Villanelle's picture, credit cards, and money. Eve takes the passport and a picture of Oksana and shoves them into her purse before returning the coat to Anna.

Villanelle tells Konstantin that Anton wanted her to kill him but now Anton is dead. Villanelle has Konstantin's wife and daughter stashed somewhere and he asks her what she wants in order to release them. She asks him how he would like to die and he says with a glass of whiskey and pills. He pours himself a drink as he explains they want him dead because he was trying to help the British get her out of prison. She tells him to get his pills. She asks for the names of the Twelve and Konstantin reveals that only "Keepers" have the names. She has him take the pills with his whiskey. He claims that he loves her more than his family and she is the best thing that has happened to him. He begins to cry as he tells her how powerful and strong she is. She commands him to take more pills and he finishes the bottle off. He throws his whiskey glass at her and picks up a log from the fireplace, knocking her upside the head with it. He takes off running as Villanelle lies stunned on the floor. She struggles to stand back up, staggering after him and firing her gun. Konstantin makes it to his boathouse and takes off in a boat as Villanelle threatens to skin his family alive.

Anna brings Eve some cake to take home. Anna asks her to let her know if she finds Oksana so Anna can forgive her before warning Eve that she is Oksana's type. As Eve is leaving, she turns around and asks bluntly if Anna ever had sex with Oksana. Anna says no and slams the door on Eve.

Eve calls Niko and gets his voicemail. She leaves another message for him, asking if she can see him when she comes home tomorrow. She enters their temporary office and joins Kenny to search through the CCTV footage. She speculates on Anna's and Oksana's relationship. Eve spots a prisoner from behind who walks like Villanelle. Kenny finds another angle and they zoom in on Villanelle's face, confirming that Villanelle was in the prison with Nadia. On the CCTV, Villanelle is led into a visitor's room where Carolyn shows up to meet with her.

Carolyn is telling Eve that Nadia's been killed

Nadia is walking in the prison yard 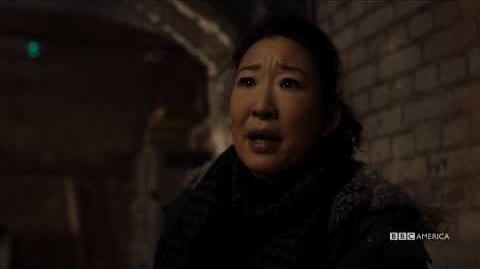 Episode 7 Trailer I Don't Want To Be Free