I Have a Thing About Bathrooms

I Have a Thing About Bathrooms

"I Have a Thing About Bathrooms" is the fifth episode of the first season and Killing Eve overall.

Having survived a terrifying close call with Villanelle, Eve now has the mole ensconced in a safe house and is buzzing. They have an exciting opportunity to glean information and crack this thing open.

Eve is in the driver's seat of the car while Elena and Frank cower in the back seat as Villanelle approaches on foot. She fires her gun at Eve but misses. She continues shooting as Eve drives away. Eve stops the car and decides to confront Villanelle. Ignoring the protests of Elena and Frank, she gets out of the car and begins walking toward Villanelle. When Villanelle raises her gun and takes aim, Eve stops walking, placing one hand in the air, the other across her chest. Villanelle aims the gun under her own chin and Eve screams, "no!" Villanelle laughs and fires at Eve's feet instead, causing her to duck and flinch. When Eve turns back around, Villanelle is gone.

Elena and Eve take Frank to a diner and question him about the assassination attempt made by Villanelle, Nadia, and Diego. Eve instructs Frank to to leave his kids at his mother-in-law's for a few nights. Frank remembers that one of the girls was named Oksana. Eve contacts Kenny and asks him to look up the name Oksana. He tells Eve that the DNA results on her suitcase came back and Villanelle's DNA is all over it.

Eve and Elena take Frank to a safe house where Max Sanford will be looking after him. Carolyn is at the safe house and Frank starts making excuses before complaining that he is having a panic attack. Carolyn gives him five minutes to change clothes under Max's supervision. Elena brings tea to Eve and Carolyn before heading back to the office. Max tells Carolyn Frank won't come out so Carolyn goes to Frank's room and cradles him in her arms, getting him to talk. Frank reveals that "the Twelve" know everything about Frank, including his deceased wife's cancer treatments. They were willing to pay for her treatments in exchange for Frank telling them the big picture of what is going on at MI5. Frank assumed they were Russian SVR agents and was the one who told them that Eve was still investigating. Frank explains there is a pattern to Villanelle's kills and the plan is to destabilize and cause chaos.

Eve calls Kenny for an update and lets him know about the Twelve. She encourages him to give Elena a call. Back inside the safe house, Carolyn tells Eve that the police have found Diego's body but no one else. Carolyn asks after Kenny since Bill's death because Kenny's own father died a few years ago. Eve promises to keep an eye on him.

Eve sits at a bus stop and pokes at a crack in the windscreen. She stands up and slams her fist against it, shattering the window. Her phone rings and she answers Niko's call, telling him to bring Dom with him. She hurries away from the bus shelter.

The office is empty when Eve gets there. She picks up a baby blanket off Bill's desk when Kenny returns. He tells her she should still talk to Bill even though he is gone because it helps. Kenny has found prison records on a few people named Oksana and Eve stops when she sees the picture for Oksana Astonkova. Kenny tells her that she supposedly died in prison four years ago. She was imprisoned because she "chopped [a man's] knob off."

Eve arrives home and unpacks the suitcase, applying some of the perfume Villanelle made for her. She tries on a dress and a pair of shoes, admiring herself in the mirror. She kicks off the shoes and heads to the kitchen to review the files on Oksana and pour more wine. She hears a noise and calls for Niko before checking the front door. When she turns around, Villanelle stands in her hallway and tells her not to run. Eve runs upstairs, locking herself in a bathroom. Villanelle breaks open the door and Eve defends herself with a toilet wand. Villanelle easily overpowers her and tells her to stop screaming as Eve keeps screaming. She pins Eve into the bathtub and turns on the water to calm her down. She explains that she just wants to have dinner with Eve.

In the kitchen, Eve only has leftover shepherd's pie, which she microwaves for Villanelle. Villanelle helps her change out of her wet dress, complimenting her on her body. Villanelle sits down at the table as Eve gets silverware and slips a knife into her pants, which Villanelle comments on. The microwave dings and Eve brings over the shepherd's pie, removing the knife from her pants before she sits down. Villanelle comments on Niko's mustache as Eve asks her why she is there. Villanelle begins to sob, asking for help and saying she knows what she is but they make her hurt people. Eve calls her bluff and reveals that she knows Villanelle is Oksana; she knows her history and tells her she is a psychopath. She asks who Villanelle works for and Villanelle tells her that if Eve goes high enough up the chain, they probably work for the same people. Eve shows Villanelle her prison file and asks about the castration and why Villanelle killed Bill. She replies it was because he was slowing Eve down. Eve picks up the knife even as Villanelle warns her not to and Villanelle quickly has her pinned against the fridge with the knife pointed at her neck. Villanelle sniffs her neck and asks if Eve is wearing her perfume. The door opens as Niko and Dom enter. Eve begs for their lives as Villanelle picks up Eve's phone and asks for her PIN ("1234"). Villanelle takes Eve's phone and dress and says hello and goodbye to Niko and Dom on her way out the door.

Eve rushes over to Carolyn's house, interrupting her at dinner with friends and Kenny, who is her son. Carolyn takes her and Kenny into another room and Eve explains that Villanelle has her phone, which gives her access to Frank's interview and his location. She also asks for protection for Niko.

Frank is brushing his teeth in the safe house when Villanelle appears behind him in the mirror. Villanelle toys with him as he begs for his life but she is unsympathetic. She takes out a switchblade and Frank asks if she can kill him in the bedroom. Villanelle responds that she has "a thing for bathrooms" but agrees anyway and directs him to the bedroom. He attacks her with a chair but she disarms him and demands for him to take off his clothes.

Outside the safe house, police in tactical gear move in. Carolyn and Eve listen from a van as they report back they have a male in need of medical assistance. Eve rushes in to find Max still alive but Frank is dead in the bedroom. He is laid out on the bed, wearing Eve's dress, his knob chopped off.

Villanelle makes sausages in her apartment as she tells Konstantin her version of events of what happened with Diego and Nadia, claiming Diego ran over Nadia so she shot him. Konstantin reveals that Nadia is still alive even though "Diego" ran over her, twice. Konstantin suggests Villanelle visits Nadia in Russia before she has a chance to tell her side of the story. Villanelle worries about running into "Anna" before she questions Konstantin about the Twelve. 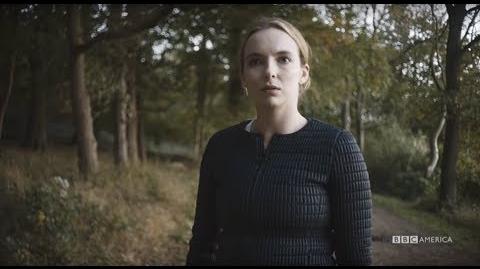 Episode 5 Trailer I Have a Thing About Bathrooms