Killing Eve Wiki
Register
Don't have an account?
Sign In
Advertisement
in: Episodes, Season Three, A to Z

"Slowly Slowly Catchy Monkey" is the season premiere of the third season and the 17th overall episode of Killing Eve.

Eve is attempting to rebuild her life, having been shot by Villanelle. Villanelle is also moving on, until she is approached by an old foe. Carolyn is being undermined at work and Kenny can't leave his own investigation into The Twelve alone.

Moscow, 1974. Dasha, a young gymnast, trains on the bars as her boyfriend and coach watch. When she screws up her landing, the coach threatens to send her back to the gutter where she came from. In the dressing room, her boyfriend brings her flowers and tells her she's a winner to him. As they kiss, she bites his lip and then violently attacks him. As he's passed out against a bench, she pours chalk powder onto his face.

In Spain, three kids rush back to a mansion as it's time for cake. Their grandmother yells at them. Inside, a bride is giving a speech about how she met her spouse. They came up to her at the airport and told her they were going wherever she was going. She initiates a toast to her new spouse: Villanelle. Villanelle stands up for her speech, which largely focuses on Maria's wealth and luxurious life. She stops and tenses up for a moment when she hears footsteps outside the room. She then talks about her bad break-up right before she met Maria. She's glad her ex is dead. The guests are confused.

During the opening dance, Villanelle becomes uneasy as she catches a brief glimpse of someone passing by the room. She goes out into the hallway but sees no one.

Later, as she and Maria are cutting the cake, she sees an older Dasha standing in the doorway. Villanelle runs up to her and throws her to the ground. As they fight, Villanelle says this is her special day and Dasha, with a Russian accent, congratulates her. As they continue to fight, chaos erupts in the room and Maria starts crying.

Villanelle and Dasha sit in silence in the backseat as they're driven off the estate in a car decorated with the usual "Just married" decorations.

At MI6, Carolyn tells Mo that her superior Diane have lost faith in her so they brought in a dreadful man to oversee the Desk. They enter the canteen for lunch. Carolyn says Diane has been waiting for a chance to strike back at her for years. Paul Bradwell, her new supervisor, arrives. He's heard Carolyn has been naughty. Carolyn introduces him to Mo, a promising agent she unearthed in Comms. She tells Mo that Paul was a rising star in MI6 until he defected to Foreign Office. Paul claims he had no idea they were going to ask him to run the Desk. She corrects and says he's overseeing, not running. Paul quips he thought about calling her over Christmas when he was going through a difficult divorce, since she's been through so many. She says divorces are easy. Paul starts leaving for lunch with the Chief. He's sure they'll make a great team. Also, he's sorry he had to take her office. He wishes her good luck with Diane, whom he heard is in a feisty mood.

In the meeting, Diane is going over all of Carolyn's recent unauthorized actions.

Eve is shopping for instant noodles in a Korean supermarket. She drops a cup of noodles but residual pain from her gunshot wound prevents her from picking it up.

At the check-out, the cashier is talking to a colleague about her upcoming honeymoon to Italy. She thinks nothing says romance like Rome.

On her way home, now in New Malden, England, one of her plastic bags tears. She sighs and starts picking up her stuff as people pass by.

Meanwhile, in Barcelona, Villanelle is looking around Dasha's apartment, filled with pictures and trophies from her gymnastics career. Dasha says they have been watching her since Rome. She's not easy to replace so they are willing to offer her more than she's ever had before if she's willing to return. Villanelle is the best Dasha ever trained. Villanelle wonders what's in it for Dasha if she returns. Dasha admits she will be sent back to Russia, her home. Dasha tells her power is there for the taking if she's smart about it. Villanelle wants to be a Keeper, which is higher than Konstantin and Dasha. Dasha scoffs and mockingly calls her "Oksana the Keeper." Villanelle then starts choking her and demands she call her Villanelle. Dasha concedes.

Kenny bikes to work. He is now working for Bitter Pill. He finds his colleague, Bear, looking for his Tangfastics. Someone stole them. Bear invites him for pop quiz tonight but Kenny is meeting a friend. Bear says he has to be socially inept to fit in. Kenny liked Bear's article on evasive jellyfish migration. Bear mocks Kenny, who hasn't written anything yet. They hear their boss Jamie yelling on the phone in his office. Bear offers to help Kenny out for his first article but Kenny admits he hasn't decided on a subject yet. On his computer, Kenny opens a file on Villanelle's kills and then deletes it.

In the kitchen of a Korean restaurant, Eve is slowly folding mandus while two colleagues of hers discuss a date one of them had. The girl said she'd call him but she hasn't yet, though the guy is sure that she will.

When her shift is over, the owner calls Eve to her office. Eve's auntie called to check in. The owner suggests she work in the front but Eve likes the kitchen.

In her messy apartment, Eve lies down to watch television with a glass of red wine.

Konstantin is deciding on a magnet in a London souvenir shop. He declines two calls on two different phones, then receives a series of Russian texts on a third. He goes to pay for a magnet and tells the assistant the magnet is for his daughter, who hates everything about London.

Dasha is training a class of young gymnasts. While she scolds a girl for screwing up, Villanelle tells another girl to talk trash about Russia if she wants to piss Dasha off. Dasha dismisses the class. Once they're alone, Dasha lights a cigarette and tells Villanelle that The Twelve are open to having her back. She'll have to prove herself first, though, to get the full benefits. Dasha has the postcard ready. She has to kill a local political agitator. Plus, the kill comes with a big welcome-home bonus. Dasha tells Villanelle to have fun with the kill. Her inventive kills are nearly as good as Dasha's back in the day. Villanelle thinks hers are better. Dasha says her kills are still being studied. Villanelle thinks they are out of date.

Eve spills some wine and cleans it up with some toilet paper. She takes a picture of the roll and sends it to Kenny, whom the roll reminds her off.

Konstantin is laughing at a movie. He listens to his voicemail. The first message is about a report that's due. The second is from Irina, who urges him to come home to relieve her of her mother's boyfriend. She has no clue why he's still in the United Kingdom as it's been longer than a few weeks, like he had told her. A food delivery arrives at the door. The takeout menu in the bag has "It's time to go fishing." written on it in Russian.

Eve wakes up and screams as she sees Kenny standing over her. She sent him some confusing, worrying texts so he tracked her phone. He thinks she shouldn't leave her door unlocked.

Over some coffee, Kenny tells her he is sorry for how things went down. She doesn't want to talk about it. She prefers those things buried. He says he went to see her after they transported her from Rome but they weren't allowing visitors. He's glad those tourists found her when they did. She doesn't miss MI6. He also quit. He tells her about his new job as an open-source investigator at Bitter Pill. They let him investigate what he wants, which is cool. He's glad not to be working for his mother anymore. He goes to ask her if she's still in touch with someone. She assumes he's talking about Villanelle and says she's done with that but he actually meant to ask about Niko. She says they see each other every few days. He heard about Niko. He asks if she worries about The Twelve. MI6 shut down the entire investigation months ago. Eve says it's not their problem anymore. Kenny blurts out he's been looking into their financial trial. Eve stops him. Going down that road almost killed her so she's not doing it again. He comforts her.

As he leaves her apartment, Kenny invites her to come hang at the office after hours for a beer. He thinks she could use some company. She locks the door after him.

In her new house, Carolyn sings along as she unboxes. She calls over Kenny for packing things like foam hands, which he says are happy memories for him. He promises to sort through the stuff when he is back. Since he convinced her to move, she was hoping he would lend her a hand. She is surprised to hear he has the work at the newspaper on the weekend. He clarifies he's not going to be told what to do anymore. She got the message. He asks if she is ever going to apologize. She doesn't think she did anything wrong, so no. She says life is a series of trade-offs, which is why she lived at their last house for years even though she didn't like it, unlike Kenny's father. She will have fish and chips ready for when he gets back.

Eve arrives at the rehab facility where Niko has been staying. She meets him in the garden. She brought him candy. She has some stuff for him to sign about the house. She assures him they are going to get through this. Niko tells her she can't fix this. Gemma's parents think she killed herself while MI6 can wash their hands in innocence. Eve says it's better if Gemma's family don't know. Niko says Eve has always been at the centre of their relationship. He deserves more than that and than her.

Kenny is listening to music and eating Bear's candy while looking into The Twelve's financial records.

Back at the restaurant, Eve's colleague says his love's cousin told him she was sick. Eve has had enough of it and finally tells him that all of the excuses are just lies. They all know it. He has to admit he has been stupid.

She heads out and calls Kenny to accept his offer to meet up for drinks.

As he delves back into the financial records, he hears the elevator. He asks if anyone's there but no one replies. He hears a loud thud and then footsteps.

On the bus, Eve observes a woman reading a crime novel.

She arrives on the fifth floor and heads into Bitter Pill's office. Kenny's not there but his music is still playing. She calls his phone and finds it on a desk. As she leaves him a message, someone falls by the window. Having her back turned towards the window, Eve only hears a loud thud outside. She tries to peek out the window but can't quite see what's going on, though she has a strong suspicion. She rushes down the stairs and finds Kenny's lifeless body in the parking lot. Kneeling by his body, she looks up to the roof but sees no one. 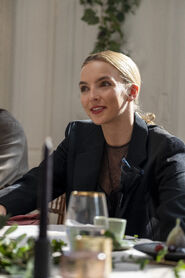 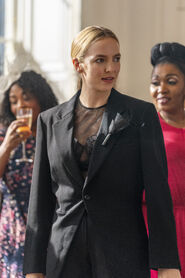 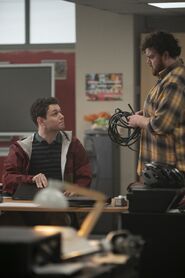