Killing Eve Wiki
Register
Don't have an account?
Sign In
Advertisement
in: Episodes, Season Two, A to Z

"Smell Ya Later" is the fifth episode of the second season and 13th overall episode of Killing Eve.

The MI6 team make a pact with the devil in order to get information from The Ghost. A visitor from Broadmoor comes with a dire warning. And Eve and Villanelle find themselves closer than ever.

Villanelle is slurping a milkshake as she observes Jay from a balcony. He gets in his sports car and she throws her milkshake onto the car, disappearing from the balcony before he can see her.

Jay's in his car going through the carwash. Dressed as an employee, Villanelle gets in and beats him before strangling him with the seatbelt.

Jess and Eve watch as Charles is yelling at The Ghost. She hasn't talked at all. Eve wishes she was more fun. Jess says not everyone is as exciting as Villanelle. Carolyn joins them and Eve asks her to let her try again.

Eve and the Ghost stare at each other. Eve says it's unusual to be a woman in her line of work. The Ghost says not so much anymore and asks if Eve wants to do it herself. Eve doesn't think she has the stomach for it. Eve asks if she knows Villanelle. The Ghost says she is known as a dalgyal guishin, the demon with no face.

Villanelle is staring down a street performer. Konstantin joins her and she tells him this is her new hobby. As they walk, Konstantin gives her the money Jay's uncle paid them. With a number plate like Jay's, she would have killed him for free. She says another street performer but he drags her away.

Jess has suggested that Konstantin and Villanelle are freelancing now. Eve knows she must be bored. Gun for hire is too basic for her. Eve points out Jin was scared for Villanelle so Eve suggests they hire Villanelle to get the Ghost to talk. Eve proposes they put a hit out on her. Jess thinks she's joking.

Hugo agrees with the idea. Kenny is on the fence. Eve claims Carolyn is on her side.

Konstantin orders Villanelle to wait out on the street while he goes to see a friend.

Staring at the board, Jess asks Eve how much time she spends doing paperwork. She points out everything they do has to be documented. There are no exceptions to the rules. If Eve is not doing the boring work, it's not because she's special but because someone doesn't want a paper trail on her. Carolyn might be going along with this but it's not a good idea.

Konstantin exits the building and finds Villanelle eating ice cream. She says he's being sneaky. He hands her a newspaper with her new job inside. Villanelle thinks he's joking.

Hugo shows Eve the photo he chose, which she thinks is horrible. He didn't have a lot of options to choose from. Martin walks in. Carolyn sent him.

Villanelle refuses to carry out the hit. Konstantin points out Eve is making her weak. She used to be smarter.

Martin is giving a seminar on psychopaths. He stresses other people are only objects to them. Superficial charm, dishonesty, and an inability to form lasting intimate relationships, and a poverty of emotion are their key characteristics. He shows a picture of a murdered man, horrifying the whole team but Eve. The next slide shows a picture of Villanelle. Martin says psychopaths can be managed with money, praise and attention. They cannot be contained for an indefinite amount of time, though. Eve inquires if it could be possible for a short amount of time. Martin isn't sure. He points out psychopaths aren't regular humans with added negatives like sadism; they lack whatever makes people human.

Villanelle opens her door for room service bringing by a bottle of champagne. Once inside, he asks if he can do anything else. Moments later, she has her head on his lap and she gives him instructions to comfort her. She asks him if he's lonely. He admits sometimes. It's hard finding the right person. She agrees.

Eve comes home and asks Niko about his day. It wasn't bad. He's going to Oxford tomorrow for a few days to chaperone a spelling bee. He offers to come back every night but she tells him to stay there. The door bell rings. He ordered Indian.

Martin puts his bag in a locker at the London library. He meets with Carolyn between the shelves. She asks about Eve. His dull presentations are meant to lull suspects into a sense of slightly soporific superiority. He says Eve was the only one not to instinctively look away when presented with the photo of the murder victim. Villanelle's photo was the image she couldn't look at. Eve didn't seem to like what he had to say about psychopaths. His professional recommendation is that Eve's too close.

As Eve and Niko are enjoying their dinner, the door bell rings again. Eve goes to open the door but no one's there. There is a box on the porch. She opens it and finds her name spelled out in roses. Eve can barely hide her smile. She goes inside without the box and asks Niko to go upstairs right now. She seduces him into following her.

Villanelle and Konstantin meet with Eric in his antique shop. In a back room, he has weaponry stashed out.

Eve asks Carolyn how she managed to get Niko into the spelling bee so last-minute. She was the 1973 British Spelling Champion and it's a supportive network. Carolyn checks with Eve if she's okay with this. Eve asks if her support for this idea is on the record. Carolyn doesn't reply. Hugo comes in.

He helps Eve put on her bullet proof vest. He comments it looks sexy. Jess is coordinating with a back-up team but Eve doesn't want that. They need for Villanelle to think she's in control. Villanelle will only trust if they're alone. It needs to be intimate. She assures Hugo she'll get Villanelle into the car. Hugo tells her she's doing something brave.

Eve adjusts the bullet proof vest as she's leaving the office. Kenny is waiting for her. She needs him to come on board with everyone else. Kenny points out Villanelle won't have forgotten that Eve stabbed her. He wonders why Eve is putting herself and the whole operation in danger. He reminds her that Villanelle murdered Bill. He wonders what has happened to her. Eve maintains she's doing her job. He won't ever be okay with this. Eve says she'll have Carolyn move him to another team, then. Eve walks out with Hugo, leaving Kenny behind.

In her hotel bathroom, Villanelle is getting dressed up to meet Eve.

Eve goes home on the tube. As she takes off her coat on the platform, a man bumps into her. Eve follows him and extends her hand to push the man onto the rails as the train approach. She doesn't do it. The train arrives and she gets in with the other passengers. She grows more nervous as she gets closer to home.

In her bedroom, she lets her hair down. As the vest is clearly visible underneath her shirt, she takes it off as the door bell rings.

She opens the door for Villanelle, who tells her not to do anything stupid and enters the house. Eve has her take her shoes off. Villanelle complies. She offers to let Eve search her but Eve doesn't see the point. Villanelle wants a drink. She opens the bottle she brought. Villanelle has noticed she doesn't seem surprised to see her. Villanelle thought she had forgotten about her. Eve hands her a cup as they don't have champagne glasses. Villanelle dumps Eve's phone into a cup, destroying it. Villanelle asks her if she's scared. She's not. Villanelle orders her to drink. Villanelle says she should be more afraid after what Eve did to her last time but she's not. Villanelle says Eve could have killed her. Eve admits to thinking about that all the time. Eve caresses her face and asks her if she thinks about it. All the time, too. Villanelle asks if she's going to apologize. She's not. Neither is Villanelle. Eve says she needs her help and compliments her outfit. Villanelle picked a black dress because she's about to be in mourning. She's here to kill Eve. Eve says that was her idea. She needed to see Villanelle. She knew Villanelle wouldn't just shoot her or run her over with her car. Villanelle takes out the pills she brought. They sit down. Eve swallows all three pills as she looks Villanelle straight in the eye. Villanelle didn't think she would actually do that. She says that was actual arsenic and yells at her to get it out. Eve goes to throw up in the sink and Villanelle starts laughing. She says poison would be too easy. She walks up to her and puts a knife to her throat and lets it slide down over her dress. She says she's expensive and asks if Eve is going to give her everything she wants. Eve says yes.

Villanelle and Eve leave the house. They get in a car parked out front. Carolyn and Konstantin watch them drive off from their car parked across the street.

A police van transporting The Ghost is driving through the Forest of Dean. They stop on the road and two officers take her into the woods. They reach a container. An officer drags her inside and chains her to the chair.

Another car arrives in the forest.

Villanelle is not sure that this is legal. She's looking out for Eve. Eve enters the container by herself. The Ghost refuses water. Eve asks who ordered the hits on Alister and his colleagues. The Ghost remains silent, which Eve says will only make it worse. She walks out. Villanelle goes to enter the container and asks if Eve would like to watch. Eve declines. Villanelle smiles and goes in. Eve distances herself from the container.

Inside, she finds that the Ghost has been unchained. Eve approaches her. She's still alive. She calls Eve a monster.

In Oxford, Villanelle is waiting for Niko. She apologizes to him about the complaints. She was just trying to get Eve's attention but turns out she doesn't care about Niko's life at all. She mocks his mustache. Niko walks away from his student and she follows him. He throws her against the wall. Villanelle suggests he try things like this with his wife. Niko threatens to kill her. She claims to be hurting. He lets go of her. Villanelle says she came here to tell him that he has nothing to worry about. She has forgiven Eve. They are friends now, or even more than friends. They are colleagues. Also, she has been stabbed before and she knows what it's like to be in the moment. Niko didn't know Eve stabbed her. Villanelle tells him what happened in Paris. She shows him the scar and wonders who the bad guy is here. "Smell ya later," she says before walking off, leaving behind a baffled Niko. 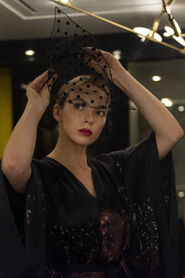 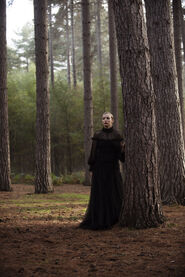 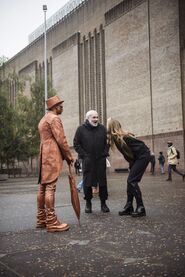 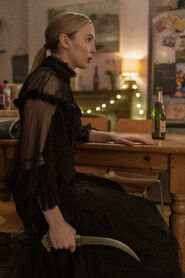 Must See Moment- Are You Scared? - Killing Eve - BBC America