"Sorry Baby" is the fourth episode of the first season and Killing Eve overall.

Intel from Berlin points to the existence of a mole, prompting Eve to undertake her first surveillance operation. Villanelle is sent to England to eliminate a member of British Intelligence. Villanelle wonders, could it be Eve? Meanwhile Eve, in emotional turmoil, now knows how high the stakes are.

Eve and Niko attend Bill's funeral service, seated behind Bill's wife, Keiko, and their baby daughter. Frank goes up to say a few words and Eve is disgusted with his terrible speech. When Bill's daughter begins crying, Eve stands up and hurriedly leaves the service while Frank is still talking. Elena follows Eve outside and they console each other, reiterating that no one is to know the truth of how Bill died. The official story is that he was mugged at a club.

Konstantin arrives at Villanelle's Paris apartment to find it decorated in blue, gold, pink, and white balloons and a matching cake. He swipes a bit of frosting from the cake as Villanelle makes her entrance, dressed like Konstantin down to his beard and mustache. She wishes him a happy birthday and forces him to dance with her. She tries to get him to lift her up but he complains of his shoulder and throws her on the bed instead. It is not his birthday and he won't tell her when it really is. They go to the bathroom where she gives him birthday gifts. When she tells him her name is Konstantin, he rips off her beard and mustache and says that he knows she used Eve's name and killed Bill. He hands her a postcard for her next job, this time with her "little brothers and sisters" because he can't trust her alone anymore. He opens another present and Villanelle reveals she knows he has a daughter and has gotten her a stuffed animal.

Villanelle steps off a train in England and approaches a man (Diego) on the platform holding a bird watching sign. He is her contact and takes her to a van to wait until tomorrow. Villanelle gets in the van and quickly recognizes the woman (Nadia) in the passenger seat who attacks her. They fight in the back of the van until Diego stops them and they return to their seats.

Niko offers Eve stew and wine while Eve sits forlornly on the couch. Niko confronts Eve about Bill's death and how he is worried about her. They briefly fight before Niko informs her that her suitcase has returned from Berlin.

In the van, Diego asks Nadia and Villanelle about their history but neither are forthcoming. Villanelle asks who the target is and Diego confesses they don't know yet. He tries to show affection toward Nadia but is rebuffed. Nadia tells Villanelle that their target is a member of the British Intelligence Services.

Eve is sitting on the edge of her bed and crying. She gets her suitcase and opens it, discovering it has been repacked with new clothing with the tags still on. She finds a box of "La Villanelle" eau de parfum. The card inside reads "SORRY BABY x." Eve hastily tosses it back into the suitcase and warns Niko to stay out.

The next morning, Eve meets with Elena and Kenny to discuss the suitcase and perfume. She assigns them the task of finding out where the clothes were bought and if there is any DNA or security footage. They head to the office as Eve continues providing instructions but stops when she sees Bill's empty desk. Kenny has gone through the documents Jin Yeong gave Eve at their dinner in Berlin and there are bank statements from the Cayman Islands used to pay off the Chinese double agents that Zhang Wu uncovered. Kenny has noticed a British account number receiving three payments a year of $17,700 that terminates at St. Henry's prep school in Sussex.

Eve meets Carolyn at a butcher shop. She tells Carolyn about a work party a year ago where Frank got really drunk and emotional about not being able to afford to send his kids to St. Henry's school. Kenny is tracking Frank down so they can bring him in for information.

Diego, Nadia, and Villanelle check their weapons. Diego leaves Villanelle and Nadia for a moment and Nadia corners Villanelle, prompting her to punch Nadia in the nose. Diego returns and threatens that he has permission to kill one of them if they don't stop fighting.

Kenny has tracked Frank down to a village called Bletcham in Buckinghamshire. Eve decides Elena will go with her to Bletcham to do surveillance on Frank.

Diego, Nadia, and Villanelle arrive in Bletcham just as Diego receives their next target: Frank Haleton. Diego passes out guns and silencers, sending Villanelle and Nadia to the front of the house while he takes the back. Nadia tries attacking Villanelle again but Villanelle stops her and tells her she is glad Nadia got out. They head to the front door and knock. Villanelle introduces herself and Nadia as Natalie and Fanny respectively to Frank's mother, Veronica. Veronica tells them Frank has just left and invites them in for fruitcake.

As Elena drives Eve to Bletcham, Elena tells stories about how Carolyn has saved the world several times going all the way back to the '80s when she stopped an ex-KGB agent from selling plutonium.

Villanelle eats hot fruitcake served up by Veronica while they wait for Frank to return. Veronica calls Frank to see where he is at. Veronica tells them that Frank has been unexpectedly called back to London but Villanelle already noticed Frank's car is still outside. They meet Diego back at the van and tell him they will wait.

Kenny calls Eve to let her know that someone called Frank's phone from a landline at the same place his phone is at.

Villanelle waits out front with Diego while Nadia takes the back. Frank's car starts to drive away with Nadia chasing after on foot. They jump into the van and chase after Frank with Villanelle driving.

As Elena and Eve arrive in Bletcham, Kenny relays to them that Frank is speeding away.

Nadia has put together an automatic weapon and stands up through the moon-roof, taking aim at Frank's car. Frank's back window is shot out yet Frank manages to evade being shot and puts some distance between him and Villanelle.

Eve has Elena pull over while she calls Frank. Frank has stopped his car and is hiding in his front seat. He is panicking and Eve tries to calm him down.

Villanelle, Diego, and Nadia approach Frank's car and get out with their weapons. Diego shoots first, followed by Nadia and Villanelle and they ply the car full of bullets, blowing off the hood. Frank hides in the bushes, clutching his phone with Eve on the other end. Villanelle provokes Diego and they raise their guns at each other. Nadia shouts out, "Oksana," revealing to Diego that Villanelle is Nadia's ex-girlfriend. Villanelle claims she has been sent to get Nadia out and tells her she is beautiful. Nadia turns and fires at Diego, killing him. Villanelle hugs Nadia and invites her to go anywhere she wants, first class. She has Nadia check the trunk of Frank's car.

Eve tells Frank to move toward a visible tower in the distance as she and Elena get back in the car to intercept him.

Nadia finds a kite and Villanelle tells her to put it in the trunk of their van. Villanelle reverses the van over Nadia before driving back over her. The van stalls and Frank takes his opportunity to run. Villanelle gets out of the van, picks up a gun, and shoots at Frank before following after him on foot. Frank continues running toward Eve and Elena as Villanelle shoots at him. Frank makes it to their car as Villanelle approaches, aims her gun at Eve, and shoots. 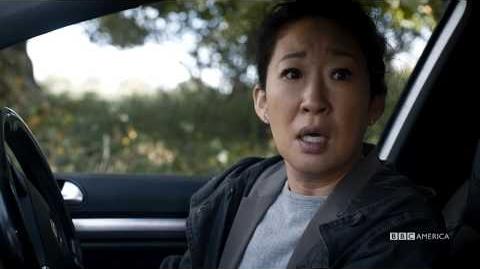