Take Me to the Hole!

Take Me to the Hole!

"Take Me to the Hole!" is the sixth episode of the first season and Killing Eve overall.

A female assassin is taken into custody in Russia, and Eve and Carolyn head out to Moscow to negotiate access. She could hold the key to the organization that runs Villanelle. Meanwhile, Villanelle is smuggled into the same Russian jail.

In Russia, Konstantin goes over Villanelle's cover story for while she is in prison. She is Natalia Popova who has been imprisoned for stealing hats. Once she is in prison, she will need to see the doctor, kill Nadia, and Konstantin will collect her in a few days. Villanelle tells him she will see him tomorrow. They meet the prison transport van and Villanelle waves goodbye as she climbs in.

Once in prison, Villanelle changes into a prison uniform and undergoes a cavity search. She makes a snide comment to the prison guard who slaps her. She slaps the guard back, earning her a beating from the other guard. She makes her way through the prison and to her cell before asking to see the doctor.

In Eve's office, Kenny reports that Nadia was picked up in Bletcham by Russian intelligence and was taken to the same prison Villanelle "died" in three years previously. Eve asks Carolyn if they can go to Moscow to question Nadia. Both Kenny and Elena opt out of the trip.

Eve meets Niko at his bridge hall and catches him smoking. He shows her a newspaper with Frank's murder on the front page, pointing out that he was at Bill's funeral and wants to know how many more people have to die. They get in a screaming match and Eve slaps and shoves him. Niko walks away before stopping and telling her they should forget about the fight and get some dinner. Eve tells him she can't; she has to got to Moscow.

In Moscow, Eve and Carolyn take a taxi as they discuss what the Twelve might want and review Nadia's and Oksana's prison files. Carolyn puts on makeup, prompting Eve to ask about Carolyn's Russian contact, Vladimir Betkin, and how well she knows him. They arrive at the hotel and check into their rooms. Eve calls Niko and gets his voicemail. She hangs up without leaving a message.

At the bar, Carolyn and Eve are having drinks before Vladimir arrives. Carolyn gives Eve advice on her personal life, telling her she shouldn't have one because it is a detriment to the people in her life. Vlad shows up and greets Carolyn before introducing himself to Eve. He has another person joining them: Konstantin. Carolyn greets him with familiarity and they soon fall into retelling old stories. Carolyn eventually gets to the matter of Nadia but Vlad is withholding. She brings up the Russian sleeper agent who was assisting Frank and asks if either of them are investigating Victor Kedrin's murder. Carolyn offers an exchange: for a meeting with Nadia, she will provide them with the information they received from Frank before he was murdered. Eve reveals that Villanelle/Oksana broke into her house to have dinner and thinks Nadia can provide information about her. Vlad capitulates to one interview as long as Konstantin goes with them to the prison. As Eve and Carolyn head to their rooms, Eve tells Carolyn that she doesn't like Konstantin.

The next day, Villanelle asks again to see the doctor as she walks by the kitchen. She spots Nadia and asks the guard how she can get a job in the kitchen, again mouthing off. The guard restrains her and forces her to keep walking. Carolyn, Eve, and Konstantin arrive at the prison as Villanelle is being escorted through the courtyard. Villanelle keeps her head down-turned but Konstantin spots her anyway. She is taken to the bathroom and forced to unclog the drain with another prisoner, Agniya. Agniya reveals to Villanelle that she is in prison because she is spontaneously violent.

Eve, Konstantin, and Carolyn arrive in the interview room. Konstantin leaves them alone, saying it is better if it is just them. Nadia enters on crutches and with a broken arm. Carolyn begins questioning Nadia, offering her release from prison and transport to the UK. Eve asks about Oksana and Nadia reveals that Oksana took her place in their plan to escape the prison. Konstantin walks through the door, interrupting Nadia's story about what happened three years prior. He claims the sound in the other room wasn't working but Nadia refuses to speak further on the escape plan. She mentions the name "Anna" and Konstantin commands her to tell them.

Villanelle walks around the prison yard with Agniya. She spots Nadia in the distance and picks a planned fight with her new friend, getting Agniya to punch her.

Vladimir meets up with Konstantin, Carolyn, and Eve in a car. Carolyn asks Vladimir to grant immunity and safe passage for Nadia so they can get further information. Vlad wants to know the name of the organization behind the assassinations and Eve tells him it is the Twelve. Vlad still refuses to help and exits the car.

Villanelle has made it to Dr. Marat's office. He recognizes her and instructs her that she will need to get herself into the hole by 9 pm tomorrow and Konstantin will meet her. He provides her with Nadia's location in Wing B, Cell 21 and slides a blade across his desk.

Carolyn and Eve are at the bar, drinking. Eve tells Carolyn that she doesn't like Vlad, either. Carolyn reveals that she and Vlad have an "illicit" history together, however, Vlad still has not forgiven her for a plutonium plot he was framed for when it had been Konstantin who was Carolyn's source. Eve apologizes for not liking either of Carolyn's "boyfriends." After Carolyn heads to bed, Eve calls Kenny to see what he found out about Anna. Kenny tells her that Anna was the wife of the man Villanelle had castrated six years previously. Eve asks Kenny to dig up any information on Konstantin and Carolyn.

Villanelle is in the food line with Agniya standing behind her. Agniya keeps bothering her and Villanelle drops the knife on the ground. Agniya picks it up and refuses to give it back just as Villanelle reaches the front of the line and confronts Nadia on the other side of the counter. Nadia backs away, throwing things at Villanelle as Villanelle tries to get the knife back from Agniya. She punches Agniya and hops over the counter, chasing after Nadia as she pretends that Agniya is really chasing after her. Villanelle sets it up so Agniya ends up stabbing a guard trying to stop them and she palms the knife. Nadia escapes out the kitchen as another guard tries to calm Agniya down. Villanelle stabs the guard from behind and steals her keys.

Eve meets privately with Vlad on a bridge. She pleads with Vlad to give them Nadia and they will release the sleeper agent who helped Frank. Vlad refuses and starts to walk away. Eve stops him by saying she knows who was the real source for the plutonium plot.

In the prison, Villanelle makes her way with the guard's keys to Cell B-21 but Nadia is not there.

Eve calls Kenny, begging for any private information he can find between Konstantin and Carolyn.

Nadia makes it to her cell and scratches something on a piece of paper. She folds it and writes "Eve Polastri" on the outside. Villanelle slides out from under the bed. Nadia tells Villanelle about how the British are trying to get them both out and Konstantin is working with them. Villanelle hugs a sobbing Nadia as she begs. Villanelle turns away briefly and Nadia takes the opportunity to slip the piece of paper under the door. A guard spots the paper before noticing a pool of blood seeping out from under the door. He opens it to find Villanelle standing with her bloody hands raised, screaming, "take me to the hole!"

Kenny calls Eve back that he found letters from Konstantin.

Villanelle is placed in the Hole. Dr. Marat visits her to give her some pills to calm her down. Villanelle asks where Konstantin is to get her out. The doctor asks, "Konstantin who?"

Eve tries calling Niko but gets the answering machine 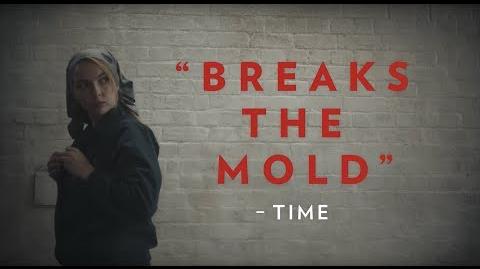 Episode 6 Trailer Take Me To The Hole!